Whenever I am asked why I became a mental health counselor, I typically try to be as honest as I can and explain that I just followed a hunch.  Many therapists go into the field in some part due to their own positive experiences in therapy.  Be it assisting with past trauma, navigating dysfunctional family patterns, or managing mental health diagnoses, there is usually a sense of wanting to give back what was once received in therapy.

My experience was somewhat different.  I had not had any exposure to therapy, and all things considered I had what many would consider a rather privileged life.  Nonetheless, my intuition guided me to the field and I have never looked back.  To be honest though, and I suppose somewhat ironically, I had always had this nagging thought, “Can I really help individuals suffering from mental illness when I had never experienced it myself?” As it would turn out, about two years ago I got a glimpse of what that suffering might feel like.

Origins of a Mental Health Counselor

On a random early day of summer in 2019 I was exercising in the park and was struck by a very sudden, and very targeted headache.  As I walked home I was somewhat rattled and my mind of course began it’s dance between telling myself that it was nothing, and wondering if I had a brian tumor.  This led to a series of conversations with my wife and eventually to a doctors appointment, and subsequent CT scan.  Fortunately, the scan was negative and I was fine … physically.

Apparently, for my mind, it was too late though as a thought had been planted and began to grow into what would ultimately lead to my first panic attack.  I can so vividly remember laying down for bed one night and having the simple thought of “what if there had been something wrong with my brain and it somehow led to paralysis.”  This wasn’t a completely new thought, but something was different this time.  Perhaps it was the very real scare of getting the CT scan, because for some reason this time my body began to respond to the thought.  I felt a wave of fear come over me that I had never experienced before.

Fortunately, my training and knowledge as a therapist set in to help me feel in control.  I told my wife that I thought I may be having the early signs of a panic attack, sat up in my bed and breathed through it.  I regulated with relative ease and the panic did not take me.  I wrote it off as strange and I went back to bed.

Later that night I woke up to the same panic setting in.  However this time I could not breath my way out of it.  Suddenly memories started coming in of past experiences in which I felt the presence of panic, but didn’t know it at the time.  My mind was recalling these memories in an attempt to remember how I staved off the panic before.  I realized that it was connected to a feeling of claustrophobia, and I knew that going outside would likely stabilize me.

However, just like the deep breathing, this did not end the racing thoughts of panic.  In fact, it did the exact opposite as my thoughts went haywire with fear.  I thought to myself, “I’m outside! There is nothing trapping me in…why do I still feel trapped?!”  And that is when it clicked.  I experienced true panic.  The panic of being trapped inside my own mind.  Inside my own consciousness.

What followed was a summer of intermittent panic attacks, mostly in the middle of the night.  Like I had heard described by clients in the past, I couldn’t tell what was worse … the actual panic attacks, or the fear of them.  I am fortunate enough to report that as time passed, the panic attacks faded away.  I still have some nights that I wake up and feel it lurking around the corner.  The lock has been opened in my mind, and I’m not sure when or what will open the door again. 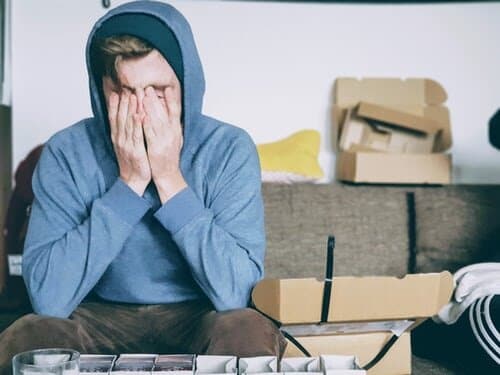 While it may sound cliche to say, in the end I am thankful for this brief encounter with mental illness.  Not so that I can feel a part of or that in some way my work as a therapist will be made more credible by it.  Rather, I am thankful that I got just a glimpse of what so many people struggle with on a daily basis.

My experience as a a mental health counselor, matched with these encounters over that summer have taught me a great deal about mental health.  What I have learned about mental health, and more specifically mental illness, is that there is so much we do not know about it.  Mental illness might best be conceptualized as a part of the mind drifting from reality.  That is the best way I can describe a panic attack.

Once the panic sets in, reality itself is completely in question.  Everything is in question.  There is absolutely no guarantee that the mind will return to normal and this is absolutely terrifying.  Your grasp on reality feels so distant that within seconds the mind is convincing you that the panic is the true reality.  It deceives you into believing that the reality you have lived your whole life is the false one and that you have no hope of returning to it.  This all happens within seconds and you do not have one ounce of control over it.  I cannot imagine a worse torture.

I have worked with a wide variety of mental health issues within my practice as a therapist.  While there are certainly similarities, every case is also unique.  Every case is an opportunity to learn just a little more about the mind and to build greater understanding of the human experience.  What I have also learned about mental illness is that it demands our respect.  Mental illness wields a great power.

Whether it is depression, anxiety, panic, PTSD, delusions, or hallucinations, on some level mental illness starts to alter our grasp of reality.  Perhaps one day it drains the energy out of our body, or the next day it makes us think the worst case scenario is just around the corner and the next day it makes our body look 20 lbs heavier than it actually is and the next day it makes our senses see or hear something in the room that isn’t there.  The pages of the DSM are filled with mental health disorders.  While it may not sweep across every disorder that can be found, the common thread to be seen is that in one form or another, mental illness is a fracturing of our reality.

I do, however, fear that in our effort to de-stigmatize, we may overshoot the mark and normalize it.  At the risk of being misinterpreted, I feel compelled to say that there is nothing normal about mental illness.  Mental illness is just that … an illness. And it’s an illness that deserves understanding, compassion, healing and respect. This is our approach at Lido Wellness Center, a mental health treatment center in Newport Beach, California.